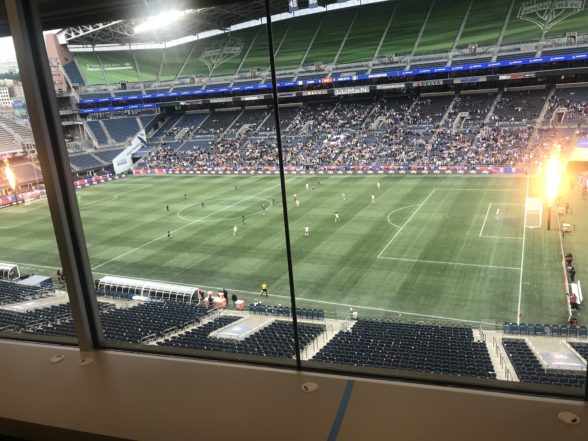 There were storylines coming into the match on Saturday night between OL Reign and visiting Angel City FC.

Both sides are above the playoff line in the early going, but points are at a premium in a tightly congested ladder.

It would be the last match for some time for a number of players on both teams heading off to international duties.

It was the third time the two sides have played already this season, a scheduling quirk that possibly played a factor in the heavily carded match that followed.

For the first time, Angel City was now playing without the injured Christen Press, an ACL tear ending her season last week.

OL Reign have announced several major moves in recent days; adding Kim Little, Tobin Heath, and Jordyn Huitema to the roster utilizing resources acquired in previous moves. None of those three players were yet available for Saturday’s match with Angel City FC at Lumen Field in Seattle.

The match began with both teams pressing for a quick goal and creating chances. Angel City got a chance in the opening minutes before the hosts took it right back at them. For a good portion of the first half, the Seattle side had the most of the play, with Angel City especially managing to create some chances on the counter.

In the 31st minute, Reign forward Bethany Balcer found herself in the right place in front of the goal as a deflection came her way, and she one timed a volley into the net for a one nil lead that would go into the half.

Quinn received the only booking of the first half, but the yellow card count started ticking upwards as the second half progressed, eventually finishing at eight cards. Reign forward Megan Rapinoe collected her second yellow after being subbed out, leading to it becoming functionally a bench red card and the first ejection of her career.

This was a close match that could have had a score line much different that one nil. Even though the bookings sort of take over the story line this was a match with a great deal of chances in front of the goal that were either not converted, outright saved, or cleared away. Each keeper was called upon to make saves and the hosts managed seven corners. It was a game of opportunities that matched the tensions that grew on the pitch.

The teams head into an international break, both not playing for two weeks until the beginning of July. The three huge points secured by OL Reign pushing them up the table level with Angel City.