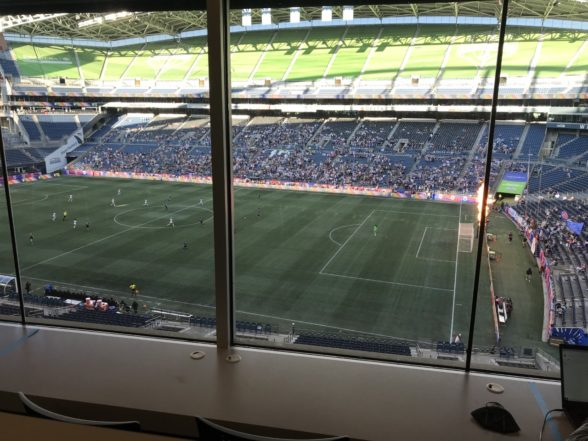 As the NWSL season moves into July and a Summer stretch of matches with clubs missing internationals, OL Reign hosted North Carolina Courage in Seattle.

The host Reign was without eight internationals out on duty. Much has been said of Reign depth this season. Along with the addition of Kim Little on loan from Arsenal and the upcoming debut of Tobin Heath, the home side was looking to grab three points and start to settle in to a more comfortable place in the league table.

North Carolina crossed the country, bolstered by the return of national team debutee Carson Pickett, but also without many of their other internationals.

The first half saw both sides playing end to end. Transition attacks suited both teams speed. With so many starters out, pushing the pace was leading to opportunities in front of the goal for both.

Courage forward Kerolin was often the target of the visitors’ attack. There were several chances in front of the Seattle goal in the first half, but the Reign defense ultimately did not break.

Reign attackers Tziarra King and Jessica Fishlock each had opportunities, but like the Courage attack, were thwarted by solid goalkeeper play.

Coming out of the half level, Reign brought on Nikki Stanton to replace Kim Little. Little had shown a numbers of positive indications of her quick adjustment to a Reign system she played in from 14-16, and Stanton brought an additional defensive veteran presence to the match.

The Reign took the lead on a Jessica Fishlock goal in the 52nd minute goal. Bethany Balcer’s diagonal through pass put Fishlock through, who then moved past Courage keeper and into the net.

Carolina continued to push to level. The Reign defense was missing two starters on national team duty, but Sam Hiatt led an organized defense that seemed to play with more control as the match progressed.

Bethany Balcer made it two nil in the 73rd minute, as Jessica Fishlock returned the favor with a slicing pass through the Carolina defense and with the conversion it doubled the Seattle lead.

The two goal cushion would hold up. The Reign would grab three huge points to push up into the top tier of the standings.