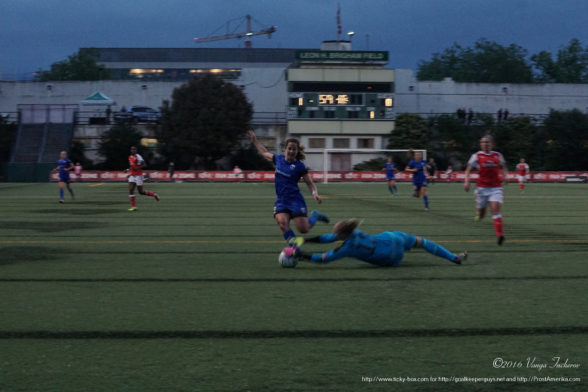 Seattle Reign FC began the 2015 slowly. An early season international match with China was played to a 1-1 draw and coincided with the side getting their collective feet under them and making a long run towards a 2nd consecutive NWSL Shield.

Arsenal Ladies FC visited Seattle this week. After enjoying what the city had to offer in the way of Pike Place Market and other landmarks, the Gunners took to the Memorial Stadium pitch and showed their quality and why they recently won the Women’s FA Cup in front of a record English crowd.

Mid-season friendlies are potentially both an opportunity and a problem for a team. For Seattle and Laura Harvey, it was an opportunity to get back on the pitch only a few days after a disappointing home loss to Chicago Red Stars. It was also an opportunity to get 90 minutes to her depth and regular subs like Lindsay Elston, Havana Solaun, and Paige Nielsen while getting a full half a match to a few players further down the bench.

Both most recent BBC Footballer of the Year recipients saw action during this match, with Arsenal’s 2015 recipient Asisat Oshoala and Seattle’s 2016 winner Kim Little each seeing about a half of action.

For two teams who had never met there was an interesting history or connection between them. Players had met before on different teams and in internationals, but specifically that Reign FC coach Harvey and midfielder Little both having won trophies during their tenures at the London club.

Number 17 scored in the 17th for Seattle. Bev Yanez struck a top of the box shot into the upper corner to get the scoring underway, showing the form she has maintained over the past few seasons. 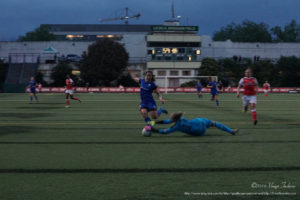 Even with a block of subs available to each coach the game did not suffer from a lack of continuity. Harvey chose to use her subs in a block, other than the 30th minute substitution of Jessica Fishlock. Fishlock, only a month removed from a fractured leg, started and seemed her usual self. The 30 minutes was according to plan and Fishlock seemed pleased with how it went after the match.

The PK in the second half was a reasonable call. Although not a hard foul, there was clear contact and Arsenal converted, tying the match. Both sides pushed for a win down the stretch, and the friendly ended up with a 2nd half yellow issued to each side. 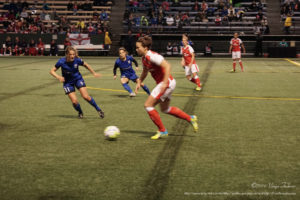 There has been internet chatter about a Women’s Club World Cup like is played in December in the men’s game. After watching two sides that could be a part of something like that play an international friendly in Seattle FIFA needs to get to work on it.

For Arsenal, the trip to Seattle is followed up by an international break and some time to get ready for their next match.

For Seattle, Portland beckons on Sunday the 29th with important points available in a match with many internationals missing.

It was not that long ago that the Cascadia Derby between Seattle and Portland was a USL First Division match between the Sounders and the Timbers. In 2016, it is not only those teams in MLS, but the women’s pro game bringing passion to the stands. Two bus loads of Rose City Riveters arrived clad in red and positioned themselves across the Reign supporters groups. Seattle drums competed across the pitch with the Portland chants while their beloved Reign and Thorns competed on the pitch. 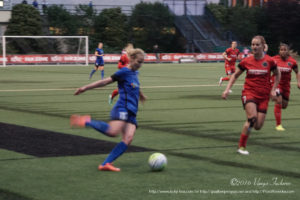 The first half saw both sides getting some chances, but physical play with every ball being challenged kept both sides off the board early. The turf got a victim in the the 4th minute when Manon Melis had to come off due to a nasty looking knee injury. Carson Pickett came on into an attacking role, switching Kiersten Dallstream to the right side opposite Meghan Klingenberg and setting up a game long battle between the two number 25’s.

However, the scoreless first half quickly changed in the 2nd half. Portland got an opportunistic goal from Nadia Nadim in the 46th when she out jumped Reign keeper Hope Solo over Reign defender Lauren Barnes, stunning the crowd. Seattle bounced right back with Bev Yanez tying the match in the 49th with a powerful header on a Barnes corner. Suddenly, it was a 1-1 thriller.

Christine Sinclair made her 2106 season debut in the 56th. With Tobin Heath missing on a red card the Thorns were looking for some veteran presence as the match moved into the final third. With both Sinclair and Dagny Brynjarsdottir on the pitch the Thorns had a 15 minute significant height advantage up top, but a more defensive substitution took away their brief twin towers.  Less direct play followed.

The game continued to be physical on both sides, with Seattle captain Keelin Winters going down in the 62nd. There were bodies on the ground several other times. The Seattle trainer was busy for a while. It wasn’t until the 87th minute when the referee finally reached into his pocket to book Lindsey Horan for a pull back on Little. 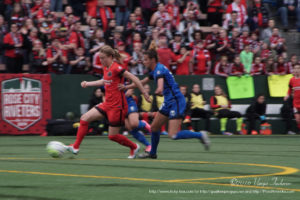 Both teams pressed down the stretch. Kim Little nearly gave Seattle a lead late with a flick on to herself for a volley, but it went high.

Neither side nor coach seemed satisfied with the result post game, and there were some clear frustrations evident post match. One ended up getting fined for expressing that frustration. 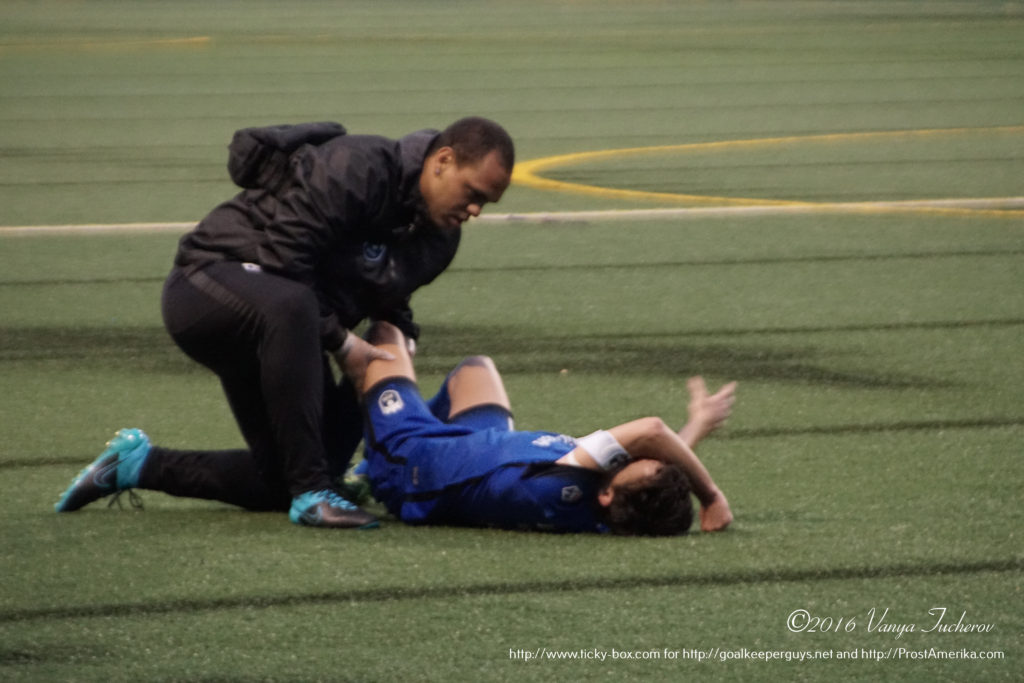 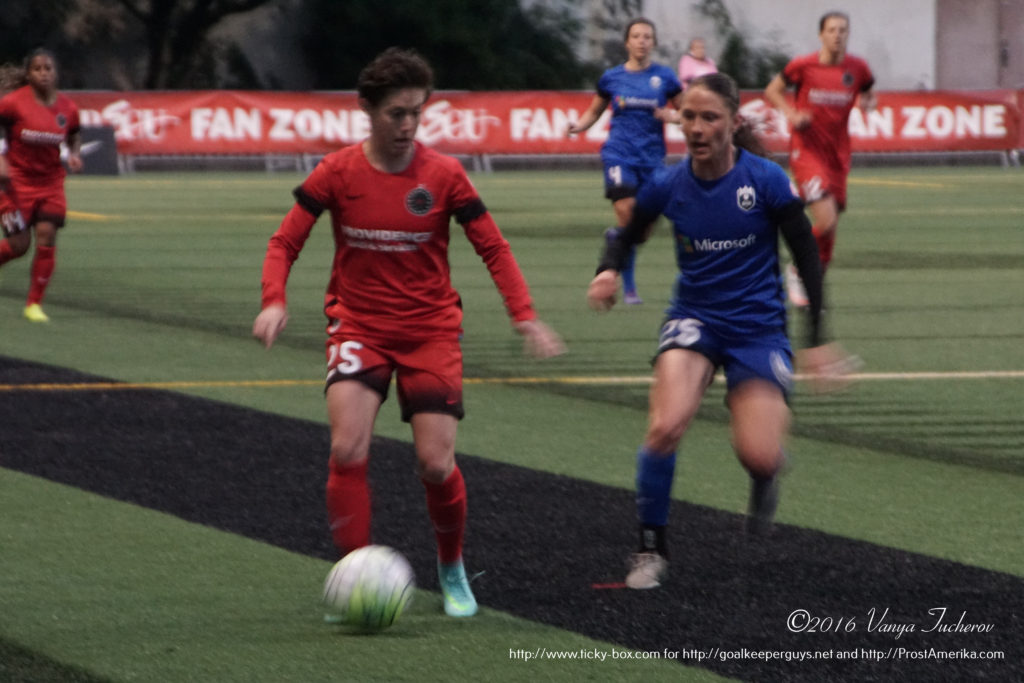