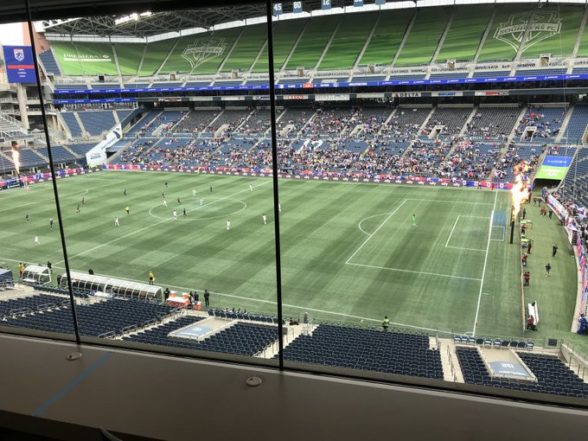 For the hosts, it was the end of a brisk three match home stand and a chance to get 7 points from those three matches and be in much better shape in the table.

The visitors were making their first regular season appearance in Seattle, having been defeated in the Challenge Cup this spring 1-3.

Both sides were are near or full strength, with the Reign missing Megan Rapinoe.

Much of the Reign’s early season has been a lack of finishing, not a lack of creating opportunities or possession. They have managed multiple clean sheets, which has allowed them to at least grab single points when the finishing has not materialized.

The first half for the home side was a continuation of creating chances, but not getting goals. San Diego was doing a nice job of absorbing and creating some chances on the counter, but also was not seemingly too concerned about the ball being primarily in their own defensive end.

The Wave took their chances forward when opportunities presented, but the patience they were displaying was serving them early in as the match approached the interval goalless. An entertaining first half had ended without a ball in the back of the net.

Laura Harvey is prone to repeating about how much goals change games. San Diego had managed to weather 75 minutes of Seattle not being able to convert, absorbing a lot of pressure and countering with some good chances as the match wore on.

Then, a set piece from the right flank from Sofia Huerta found the diving Rose LaVelle and suddenly the goalless drama was over.

San Diego is top of the table in the early going because of their ability to get the ball to their runners up front that can score quickly. They had plenty of time to work with.

Goals continue to be at a premium for Seattle. However, this clean sheet completes the home stand without conceding, meaning that even though they only netted two goals on the week in three matches, they still grab seven huge points in the standings.

In spite of dropping the match, San Diego remains atop the NWSL standings as of this match. The Wave were dangerous at times and held off the hosts for much of the match. The expansion side looks set to be tough out of the gates as a franchise.

OL Reign celebrated the 150th league match of Jess Fishlock prior to the match.

Kim Little is returning to Seattle, to begin playing for the OL Reign in June, returning to the club after several seasons back with Arsenal.