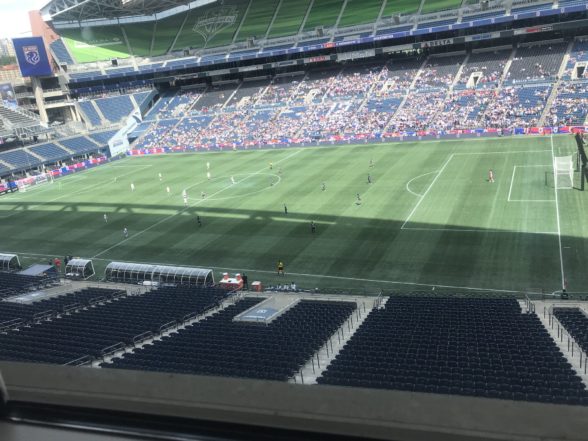 OL Reign hosted Washington Spirit in Sunday afternoon NWSL action. With both sides in need of early season points it was set to be as big a match as either club could have in May.

The host Reign were beginning a three match in 8 day stretch with a lot of home points there to grab. The visiting Spirit were coming off a midweek match and playing on short rest.

The first half score line was balanced, the hosts having more of the possession and some more chances. However, the Spirit created a number of dangerous opportunities and pressures on Reign keeper Phallon Tullis-Joyce.

Washington worked to get Trinity Rodman isolated on the right flank, and on a few occasions she got around the corner and got crosses off, but the central defense was there to clog up those and other opportunities.

OL had much of their attacking opportunities on the right flank through Veronica Latsko pushing forward. As the midfield was a generally difficult trek to get through, pushing the ball wide or diagonal became the areas where opportunity was most available.

The Reign brought Megan Rapinoe on to begin the second half and she immediately got involved in the offence, created a cross and getting a solid shot on goal in the first minutes. Ally Watt also came on and was a threat for more direct play, striding through to get a few looks. The Washington defense held up very often, and many chances were stifled by defenders converging and shutting down lanes.

There were a number of points where a single goal might have opened up the match, but in the end the goalless draw was simply the result of two good defenses stifling two good offenses on the day.

An entertaining match with a lot of end to end play. A frustrating point for both sides. Each needed three and neither got it.

The Reign looked very good at times, taking many shots, but not getting a goal means it was points dropped. For a traveling Spirit side, keeping a clean sheet on the road was a point grabbed.

The hosts have to put the good performance but lack of goals behind them quickly, as two matches are clustered in the coming week and home.

RGN: None
WAS: None