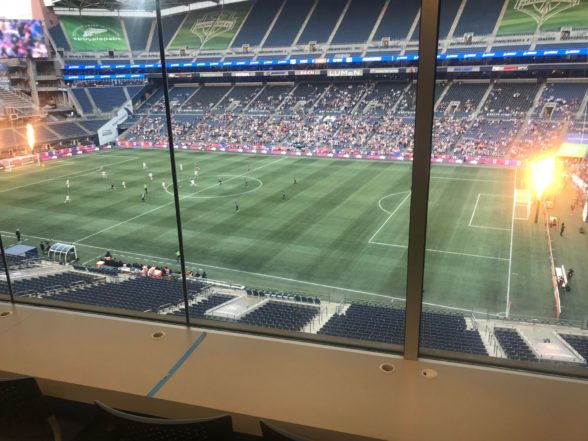 OL Reign 2
Chicago Red Stars 2
NWSL Regular Season
September 9, 2022
Seattle, WA – Lumen Field
With only a handful of matches left per team and a cluster of sides fighting to be in the top six, the OL Reign hosted Chicago Red Stars Friday night in Seattle.
At this stage in the campaign dropping points could mean being the side that drops to seventh in the standings and is left outside the playoffs.
The hosts came out with heavy pressure. Chicago countered with space and movement, working to spread the field and use quick passes to circumvent. Reign forward Megan Rapinoe and others still managed to create numerous chances in the first portion of the half. Red Stars keeper Alyssa Naeher was able to hold off the earliest attempts.
When the Reign broke through, with Jordyn Huitema scoring in the 18th minute, it was a result of a follow up on a save that deflected right back to her for the finish. her initial shot from the center of the box ending up right back at her feet for a one time low drive.
For the Seattle side, this was a first half that was a bit of a microcosm of their season. A lot of pressure and chances, not getting the goals, the other side weathers a storm and levels.
Just before the half Chicago managed to level, Ella Stevens slotting home the goal from inside the penalty area after a bit of a wild scramble. The stoppage time equalizer sent the sides into the break on level terms.
There was a distinct momentum shift coming out of the break. Chicago brought the pressure and created opportunities.
Danielle Colaprico converted a 68th minute penalty from a handball call, and it was suddenly 2-1 for the visitors. Chicago had smartly played themselves through the Reign pressure, and with the second half well underway had turned much of the momentum into their attack.
In the 75th minute Seattle nearly had a penalty on a foul in the box, but an offside flag over-ruled it.
It was only a few minutes later when Seattle would get their second goal. An 80th minute Rose Lavelle long range shot would bring the match back level at 2-2.
This is a match both sides will rightfully feel were points dropped not a point gained.
BOX
Scoring Summary
RGN: Huitema – 18’, Lavelle – 80’
CHI: Stevens – 40+2’, Colaprico – 68’
Discipline
RGN: None
CHI: None
Lineups
RGN: GK Tullis-Joyce, D Huerta, D Cook, D Hiatt, D Barnes, M Stanton (McClernon 86’), M Van der Jagt, M Lavelle, F Balcer, F Huitema (Latsko 86’), F Rapinoe
Unused substitutes: GK Dickey, GK Ivory, M Quinn, M Canales, M Athens, F King
Total Shots: 21 (Rapinoe, Huitema – 6)
Shots on Goal: 9 (Lavelle – 3)
Fouls: 10 (Balcer, Stanton – 2)
Offsides: 4
Corner Kicks: 3
Saves: 2 (Tullis-Joyce – 2)
CHI: GK Naeher, D Milazzo, D Morse, D Kowalski, M Aguilera (St. Georges 69’), M Colaprico, M DiBernardo, M Fisher (Pugh 45’), F Hill, F Nagasato (Gautgrat 83’), F Stevens (Cook 69’)
Unused substitutes: GK Boyd, M Foster, F Luebbert, F Griffith, F Dawber
Total Shots: 16 (Hill, Pugh – 3)
Shots on Goal: 4 (Four tied with – 1)
Fouls: 6 (Fisher, Aguilera – 2)
Offsides: 0
Corner Kicks: 6
Saves: 4 (Naeher – 7)
Referee: Allen Chapman
Assistant Referee 1: Melissa Gonzalez
Assistant Referee 2: Baboucarr Jallow
4th Official: Kelsey Harms