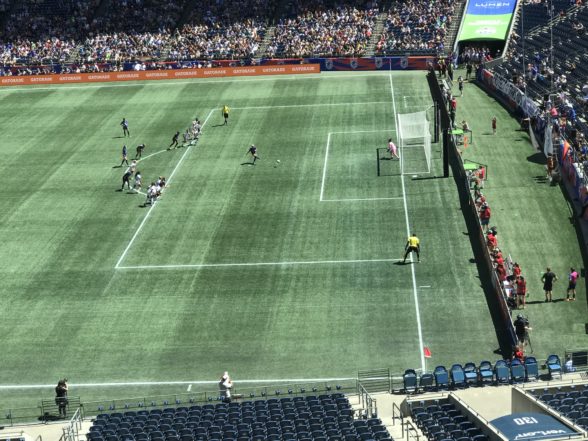 Gotham was playing its first match since parting ways with its head coach earlier in the week. Interim head coach Hue Menzies would also be without a couple of starters on the cross country trip.

The Seattle side entered the match at mostly full strength, being able to start a mostly preferred eleven. The match was an opportunity for Reign head coach Laura Harvey to become the winningest in league history.

As in many of the Reign home matches, they came out with a great deal of early pressure, creating chances. The Reign defense has needed to be staunch as the chances have been there but not the goals.

It did not take long for the Reign to break through. Rose LaVelle got in behind and through the Gotham defense in the 15th minute and blasted a left footed volley past Gotham keeper Michelle Betos. The challenge for the hosts moving forward would be could they expand their lead or would their defense have to hold a single goal lead.

Much of the first half was the Reign pressing, Gotham fighting to defend, taking counters when they could.

A 42nd minute penalty converted by Reign forward Megan Rapinoe would make it two nil going into the half. For an offense searching for goals of late, the late first half penalty finally gave the hosts a two goal first half for the first time since early May.

The second half continued the Seattle side bringing pressure. Both sides brought on fresh legs, Tobin Heath getting her longest run since joining the Reign coming on at the half.

Eventually, the pressure from the OL Reign offense broke through with a third goal. Jordyn Huitema managed to post up in the penalty area, and after receiving a long throw in, dropped a lay off pass to an unmarked Megan Rapinoe in full stride for a one touch right footed goal.

Gotham got one right back, Taylor Smith pounced on a soft defensive pass, taking the chance and cutting the lead. Unfortunately for Gotham, an own goal would follow moments later and the three goal margin returned with 15 minutes remaining.

The 4-1 score line would ultimately hold up. OL Reign would grab three big points on the day.