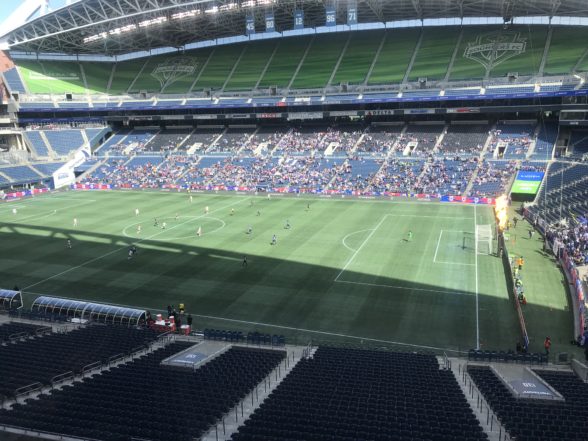 OL Reign hosted Angel City FC for the first time in Seattle on a lovely Sunday afternoon at Lumen Field in Seattle.

The hosts entered the match top of the Western table, having yet to lose a match. The first year Angel City are still a work in progress, utilizing the spring tournament as a chance to sort many things out with a regular season refresh button looming.

The opening half was a smooth moving affair. OL Reign was general having the better of possession, moving the ball from the midfield into the attacking third a number of times. The possession generated some shots and a number of corners, but only a few of the chances seemed really dangerous.

Angel City did not experience what their fellow expansion club faced three days earlier in the three goal barrage the hosts opened with. The guests did a nice job of holding their shape and converging defensively, conceding ground and possession time, but not allowing the Reign to get good clear looks on goal. The LA side also managed some good counters and created some chances themselves.

In the 34th minute the Reign broke through. Quinn sent a long through ball from the defensive half to a running Ally Watt. Watt managed to settle and beat a defender, laying the ball off to a through running Bethany Balcer. Balcer’s first time rip beat the Angel City keeper and it was one nil.

Angel City responded to the Reign goal with immediate pressure, creating some chances, but not breaking through to equalize as the opening half ticked to a close.

The second half started off with a much quicker pace, as it was clear Angel City was going to bring it and pressure the hosts to hold their lead. Despite a number of chances, the match would remain a one goal affair until late.

In the 82nd minute the visitors had what looked like their best chance just pushed wide by Reign keeper Phallon Tullis-Joyce with a left handed lunge.

The match would go level in the 83rd minute, as Jun Endo would get the ball to the end line and send in a dangerous cross that Simone Charley would head in for a goal. Charley’s looping header was a reward for Angel City, for having created many chances and keeping the match close.

It looked like the match would end level at one to one, but with about 15 seconds left in stoppage time Olivia Van der Jagt would get a head on the end of a lovely Lu Barnes cross. The stoppage time winner was just enough, although Angel City would manage one last crack at the goal that would go wide in the final minute.

OL Reign leave the match with 13 points and an unbeaten record going into the final Challenge Cup match.

For Angel City, it was a brutal way to end a match they had deservedly leveled late. But, even with only a point from their first five matches, the regular season reset could serve them well.

OL Reign have shown their depth in the Challenge Cup, and look like a club that could be dangerous throughout 2022. This is a far cry from where the side was early last summer before the coaching change.

RGN: None
LA: None