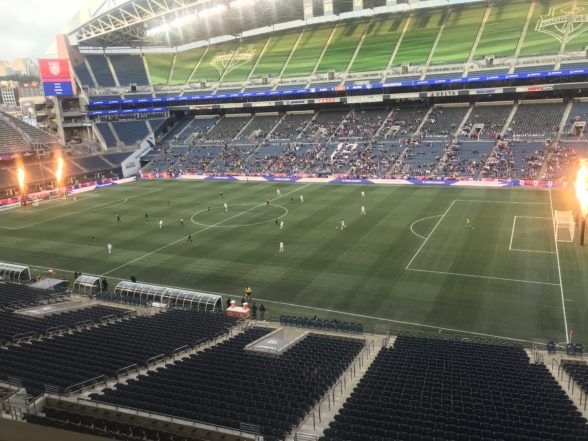 The midweek match up coming only a few days after international match duty for many players on both rosters made for some interesting opportunities for minutes. In addition, both clubs will be playing again in a short three day turnaround on Sunday.

Nikki Stanton got the hosts on the board in just the 2nd minute of the match, converting a low volley in traffic. San Diego defense was unable to clear and as the ball lingered briefly in the penalty area, Stanton was there to pounce and convert.

The early going was a Reign barrage. The second minute Stanton goal was followed in the 8th by Bethany Balcer and in the 11th by Sam Hiatt. The three goal lead in under 12 minutes was not something to have been predicted.

San Diego had managed to get the ball in to the Reign defensive end early a few times without converting, but the other end of the pitch was all Reign.

Alex Morgan would get the visiting Wave on the board mid-half, slotting one past the Reign defense to cut the lead to 3-1. It was a classic Morgan goal, timing her run to the ball over the top and then a nice touch to the far post.

The Reign would need to make a first half injury sub; Tziarra King came off in the 28th for Sofia Huerta. Either through an abundance of caution or something more serious, Reign Coach Laura Harvey did not hesitate to make the change.

The 3-1 score line would go into the half. Coming out of the interval the first ten minutes of second half found some score line stability and both sides seemed to be a little less on the front foot.

The second half saw a number of chances for the hosts to extend their lead and the visitors to cut into it. Both keepers made some solid saves on those opportunities, keeping the match at 3-1. Even in stoppage time, San Diego managed a good look, keeping up the fight, but it was just wide.

Late in the match, OL Reign brought in a line change of veteran internationals in what looked like a lock down the home stretch move.

The early goals were ultimately a lead OL Reign was able to protect.

Note: The OL Reign’s three goals in the first 11 minutes is the fasted to three goals by a team in NWSL history in all official competitions.

RGN: None
SD: None