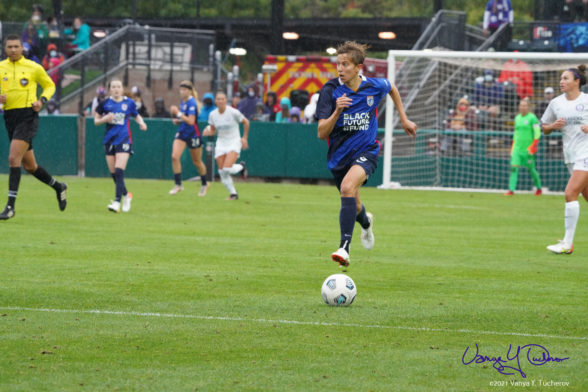 Orlando Pride made the journey cross country to face OL Reign in Sunday NWSL action. With the two teams coming out of the international break and moving into the final month of the season with playoff position, bye weeks, and home games on the line. The weekly table shuffle is now a case of positioning.

The host Reign got off to a quick start, Sofia Huerta’s 3rd minute cross was finished by Bethany Balcer. For Balcer, it was her league leading ninth goal of the campaign. With Megan Rapinoe out for the match, the Reign still are loaded with offense. Huerta’s midseason move to outside back was as much about the depth of the offense as a need in defense, as she has utilized the opportunity to become a consistent overlapping threat.

The first half pace of play remained mostly the hosts on their front foot. A brace by Eugenie Le Sommer in the 28th and 32nd minute made it suddenly three nil. Le Sommer’s first was a long range shot catching Orlando keeper Ashlyn Harris enough off her line when the defense had turned the ball over just outside the box. Le Sommer’s quick decision paid off.

Rose Lavelle and Dzsenifer Marozsan each nearly extended the Reign lead late in the half, and the crossbar denied Le Sommer of her first half hat trick.

Orlando came into the match in solid form. The first half was not without moments and chances, but they were isolated and were followed up with Reign counters that challenged the Pride defense.

Orlando came out of the interval and pressed, getting a quick shot on goal by Alex Morgan. However, breaking down the Reign defense proved to be a difficult task. The central defensive partnership of Lauren Barnes and Alana Cook continues to develop, with the firepower Orlando has up front that was essential. Even though the Pride got some chances as the half progressed, it was not until the 67th minute that they got their first corner.

Both coaches have depth in the attack, and Marta came on in the 2nd half for Orlando with the Reign sending on Angelina and Tziarra King in a match she did not have Megan Rapinoe available for.

The three nil first half scoreline would hold up, and that was how the match would finish.

The three points push the OL Reign closer to not just a playoff spot or a home game, but a bye week. The standings do remain close and a derby rematch with Portland is coming up Saturday.

Orlando remains solidly in the playoff picture, sitting fifth as of the end of the match, but that would mean a road trip in the wild card quarterfinal round.