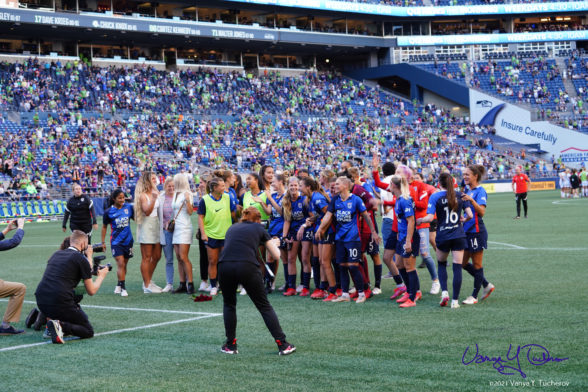 OL Reign hosted Cascadia neighbor Portland Thorns FC at Seattle’s Lumen Field on Sunday as part of a derby double header with the MLS Clubs. The visiting Thorns entered the match top of the table, while the surging Reign have recently played themselves into the playoff part of the standings.

The early going was very much the visitors on their front foot. The Thorns created a number of dangerous challenges, with Christine Sinclair getting a 6th minute shot that went just over the bar. Portland was not able to get through early, something both clubs have been good at.

In the 16th minute, Megan Rapinoe got a clear look on goal and drove a low right footed shot into the goal, giving the home side a lead after they weathered the initial pressure.

Much of the first half continued at a brisk pace, as both full strength sides traded attacks. Portland moved to slow the pace as the interval approached.

A handball call against the Thorns was converted at the spot by Rapinoe, giving her a brace in back to back matches and the home side a two goal lead.

It looked like that lead would hold going into the interval, but Angela Salem got a right footed long range volley through traffic and into the goal during stoppage time. Suddenly, it was 2-1 going into the half.

With both sides at basically full strength, the second half was a tense and physical affair.

Now having played several matches with her new club, Rose Lavelle asserted herself much more into the attack, taking on Thorns defenders and making several dangerous runs.

The score line remained at 2-1 moving into the final fifteen minutes. Not for lack of attacking. Rapinoe nearly had her hat trick with a header in the 60th. Morgan Weaver broke through in the 80th, but Sarah Bouhaddi came up with the save.