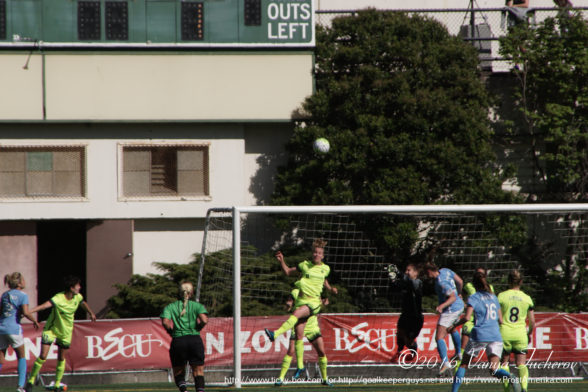 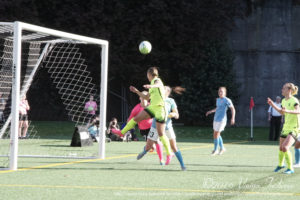 The Seattle Reign FC entered the 2016 with a two year unbeaten run on the home turf at Seattle’s Memorial Stadium. The team that came closest to ending that streak late in 2015 was Sky Blue FC. But for a Jess Fishlock header with 89:56 showing and stoppage time looming the streak would have ended. Instead, the streak continues into 2016 and is one of many storylines for the Reign FC in year 4 of the NWSL.

The 2015 late season game saw Sky Blue grab an early goal a bit against the run of play and then almost hang on before a late equalizer. Natasha Kai’s 15th minute header slipped past the Reign defense and with it one-nil at the half, shades of deja vu were written all over this match. Hope Solo kept the Reign close with a penalty save in the 36th, drawing a yellow prior delaying the kick.

The second half kicked off with more pace and in the 52nd Seattle equalized as Little to Fishlock led to a ball across the goal and a Merritt Mathias header. Early second half pressure from the Reign had paid off, but Sky Blue never let the tying goal alter their approach.

Sky Blue showed commitment to pressure and effort in spite of less possession and gathered a weak Reign defensive clearance to get it to 2-1 with a goal by Kelly Conheeney in the 68th wide open at the far post.

Pressure on the ball throughout the match put Sky Blue into a number of good positions in spite of Seattle possession. Sky Blue played composed high pressure defense throughout, making up for relatively less experience on the field with smart hustle and opportunistic finishing. Leadership in the defensive end by Christie Rampone and dangerous runs by Kelly O’Hara were difference makers in the match.

For the Reign, the streak is over. For Sky Blue FC a hard earned win to open season four.

In August at the 89:56 mark just as stoppage time would begin, it was Jess Fishlock off of nice Kim Little cross. The Reign FC two season home unbeaten run was safe.

In October, late in the USA v Brazil friendly in Seattle it was Carli Lloyd from Meghan Klingenberg. The USWNT home unbeaten streak would last after all.

In November, the UW scored first, but WSU rallied and took a 3-1 victory. WSU sustained its 12 year run over its cross state rivals.

Three impressive streaks. A few months later and only one of them continues.

The streaks were of completely different types.  The Reign had stormed through two seasons of top tier league play.  The USA had played a mix of various qualifiers and friendlies over a several year period.  The college rivalry is annual with players turning over in eligibility cycles. The opportunities for these streaks to continue and what they represent is different. It will be several months before the next opportunity for the UW to end that streak.