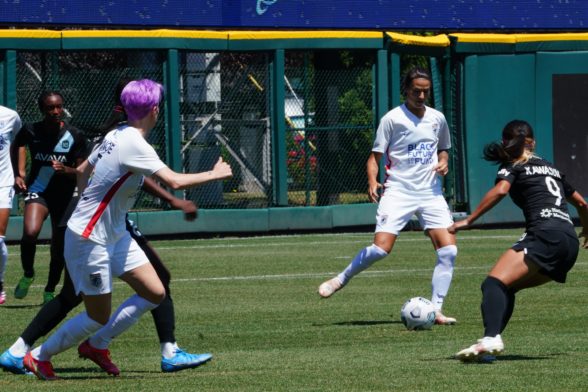 OL Reign hosted NJ/NY Gotham FC in Tacoma on Saturday afternoon in scorching temperatures. As in, the hottest day on record in June in the history of the region.

The hosts were relishing the opportunity to run out a starting eleven with OL Lyon loanies Eugenie Le Sommer and Dzsenifer Marozsan having had a few matches in the system and healthy and in form Jessica Fishlock and Megan Rapinoe also in the attack. Although Rose Lavelle and Tziarra King were not in the 18.

Gotham entered the match on the cusp of the top four, but without the services of Carli Lloyd. A stout Gotham defense has served them well in the early part of the season, but a dearth of goals had been an issue.

The early going and much of the first half was OL on their front foot, pushing the Gotham FC defense, but unable to finish off numerous chances. The Gotham midfield, led my Allie Long, proved to be difficult to break down in the middle third, pushing the Reign out wide for their attacks. The Reign responded with continual switching, looking to get Megan Rapinoe down the left flank and Le Sommer down the right. With Marozsan pushing the middle of the line, and Fishlock joining, it only seemed like a matter of time.

However, in the 38th minute, Gotham was rewarded for their patience and steady defense when Ifeoma Onomonu got free and Reign keeper Sarah Bouhaddi was caught out of net. Onomonu got around the defense and slotted a long low drive into the vacant net. Although against the statistical run of play at that point, Gotham’s absorb and counter had paid off near the interval.

The second half began with the Reign needing a goal to bring the match level. Taking the second half kick directly down the flank, a sliding Marozsan. The Gotham defense remained difficult to break down. The Reign moved to more long diagonals, trying to isolate their forwards.

The visitors struck again, grabbing a two nil lead in the 60th as Midge Purce got free with possession in front of the net, calmly finishing and extending the Gotham lead. The Reign then tried a wave of fresh legs to see about getting into the match.

Gotham grabbed a third in the 85th minute when Dom Richardson beat Bouhaddi far post, and the match that seemed so much like the home side would dominate early, was a three nil to the visitors.

Moving forward, the stout defense, difficult to break down, will serve Gotham well. For OL Reign, a line up full of international experience needs to get some goals or points and the standings are going to get away from them for 2021.