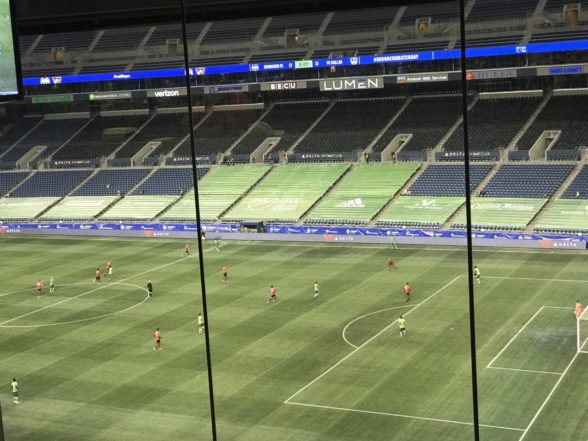 Seattle Sounders FC hosted FC Dallas in the MLS PLayoffs Western Conference Semifinals Tuesday evening. At stake, an opportunity to play the winner of the Thursday evening match between Sporting Kansas City and Minnesota United for a spot in the MLS Cup Final.

Due to the unique scheduling necessary for the pandemic altered season, it was the first meeting of the two sides in 2020. The last previous meeting being a 4-3 extra time playoff match over a year ago in October 2019.

Any questions as to whether it would be a match of Seattle pressing and Dallas hanging back to absorb were put to rest in the early going as both sides pushed in the early going for a quick goal. The early end to end action did not produce an immediate goal, but it did set the tone for the match tempo. Despite the quick pace, neither side had many clear chances on goal in the early going. Much of this was a product of both sides matching the other with energy, and the rest from consistent physical play.

The matching commitment carried through to the interval. Despite each side managing a few opportunities, neither was able to break down the other. The goal free first half was not without drama, as the hosts called for a VAR review of a deflection off of a Dallas defender that was waved off. Dallas made it difficult for the Seattle defense to easily play the ball back out of its own defensive third. A half in which neither side records a shot on goal would seem uninteresting, but this not the case.

Shane O’Neill came through for Sounders FC early in the second half, converting a header off of a Lodeiro corner to break the stalemate. For O’Neill, it was a rare goal, having not scored in six years. The assist from Lodeiro was a league record sixth consecutive playoff match with an assist. Afterwards, O’Neill reflected on the import of the set piece in a match with so few opportunities on goal. “They did a really good job, if we’re being honest, it was a tight affair. So I think it was frustrating, but it was just one of those days where we just had to stay solid and keep believing in our defensive abilities and I think honestly I think that’s the thing I’m most happy with after tonight.”

A few minutes later, when substitute Michael Barrios hit the woodwork, the visitors had their chance to level come achingly close and Seattle had evaded giving up the quick equalizer.

“We were better on one play, a set piece we worked on in training. That’s the storyline really.” Brian Schmetzer remarked after the match. A hard fought match that turned on a single set piece in a single elimination format would be enough. The O’Neill header was one of only two of Seattle’s fourteen shots to be on goal against the Dallas defense.

The loss ends the 2020 season for FC Dallas.

The Sounders now have the chance to advance to the MLS Cup Final for the fourth time in five seasons after notching their 14th consecutive home playoff win.

Seattle moves on to face the winner of Thursday’s other conference semifinal on Monday December 7. Should Sporting win, the match is in Kansas City, if Minnesota, then Seattle gets to remain at home for at least one more match.